A Day of Defeat (Bairagi Kainla) 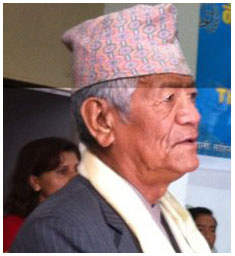 A Day of Defeat We have merely heard of love like folk tales
some of us have even read in short stories or novels
or have seen on those old tattered papers
glued to the small wooden planks in some grocery shops
that display price list, on advertising calendars,
with the picture of Laila-Majnu or the Tajmahal
but in course of time woodlouse and moth come out of the cracks
of the plank and run on it
they eat the pictures of love displayed on the advertising calendar

It is just now while walking Mal road beyond Chaurasta
I saw, forcing my eyes to peep across the pine leaves, down below
having seen no one veiled in the clouds,
I was sitting distracted in the resting house
with your memory in my heart, thinking of our youth age
and caressing the love I have for you
I carved a heart shape with a knife on the wooden plank
love is as poets usually perceive, the luxury of some emperors
like a day scarcity stricken and harrowed
already defeated while struggling to survive our youth and age,
a transient life, youth and stamina evanesce
where do you have time to love and to be loved
in exchange like a star falling from the sky like a storm and strong wind
this whim appeared in the sky suddenly and disappeared nowhere
and melted away in the exhausted mind and the head staggering
with the brilliant light of electricity
and on the plank that had been carved just now the shape of the heart
I closed my eyes and stabbed as its very heart
the knife at my own heart
since than, for many centuries running along
like an ambition unfulfilled
I have been running away like a murderer
stabbing the knife at my own heart for many many centuries
running along the street of Hastinapur, Chitrakut, and the dark alleys of Muna
and the high ways of the Kantipur
yes for so many centuries i have been running away by stabbing a knife at my own heart
I am a destitute, a murderer
I am not satisfied so far I am tired and exhausted
I am looking for a way to emancipation
by breaking the dry tear drop open
by touching someone else’s feet for redemption.
(21 january 1962, Darjeeling)
( Translation of PARAJAYAKO EK DIN by Dr. Govinda Raj Bhattarai)

Bairagi Kainla (b. 1940) is one of the greatest modern nepali poets. His powerful poetical works began since early 1960s while he was a young student in darjeeling. Kainla together with I. B. Rai and Ishwar ballabh formed a trio who came like a thunder with new literary trend and a powerful movement called Tesro Ayam ( The Third Dimension). This called for critics’ and creative artist attention to the faculty of mind. Obviously modernist poetry movement and the cubist art must have had influence over it. But this led people critics and creators to think over the art and content of creation. It called for intellectual attention. The Third Dimension has had a long influence in Nepali literature.
Bairagi however did not write much, whatever he wrote he did most powerfully. He hails from limbu community of eastern Nepal. He used local myths and lores in his poetry. This led to a diversion in traditional writing and consequently a host of native yuoths have followed his style. Kaila’s poetry is the song of freedom, he is a great freedom fighter and participated actively in different movements. One can hear the deep undertone of love and revolt in his work. His poems of Bairagi Kainla contains some masterpieces in Nepali. As early as 1969 Bairangi Kainla together with Mohan Koirala and Bhoopi Serchan were recognised as powerful poets, though quite young, and their works included in modern nepali poems.